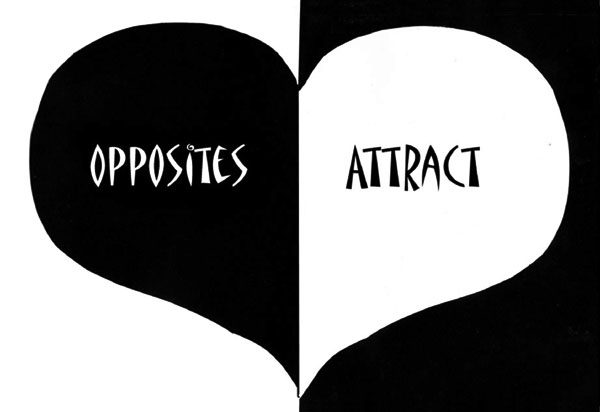 The concept that ‘opposites attract’ has been used for many years. For example, if we had to look at Disney classics such as ‘Beauty and the Beast’, opposites do attract. When looking at relationships in this aspect, Clinical Psychologist Joseph Cilona has stated that;

“Many important aspects of relationships, especially personality traits, needs, and preferences are a much better fit when they are opposite or complementary, rather than similar.”

Opposites might also be attracted to one another because the other person has qualities which they lack themselves. By seeing this quality in another person, they would be motivated to work on developing it in themselves. If one person is an introvert and the other is an extrovert, their characters would subconsciously develop by learning from each other.

Having said all this, there is the notion that the ‘opposites attract’ mantra is actually a myth. This is because we tend to gravitate towards people who are actually similar to us rather than different. Thus, whether people are attracted to similar people has been the subject of many studies. In fact, psychologist Donn Byrne conducted a study which found that people were attracted to those individuals who had similar traits. He believed that this happens because people who agree with us validate our feelings, while people who disagree with us tends to stimulate negative feelings within. However, being too similar can also have a negative effect on a relationship. This is because individuals need to develop within a relationship. Thus, as I previously mentioned, by attempting to adopt some qualities from our partners, we will eventually grow to become better individuals.

It’s easy to just say opposites attract for a couple who seem way too different to be together but the truth is that no two individuals are identically the same. Thus, even if we do pick someone who is similar to us, by time differences emerge which will automatically make them opposites.

So, answering the question of whether or not opposites attract is indeed complicated. So, I leave it up to you to decide on the answer. On a final note, research found that the happiest couples are ones who don’t have the same character. This is because they understand, and even celebrate, their differences.