Having a depressed mother 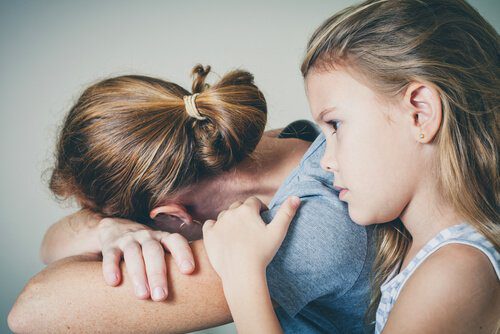 According to Ann Mastergeorge, having a mother suffering from depression does not only affect the mother but also the children in diverse ways. Having experienced it herself, she explains how it affected both her daily routine by having to do things for herself, taking care of her siblings, as well as her psychological and emotional development. This results from the lack of attention and stimulation that the mother could not provide. Despite what we tend to think, many mothers do not give birth and instantly fall into postnatal depression, rather, maternal depression tends to climax four years following the birth.

How can you help?

A combination of medicine and psychotherapy has poven a good combination to help people battling with depression. However, simple gestures can be done by the child to help the mother make bigger improvements. Simply understanding what the mother is going through and providing support can be very helpful. Suppot reminds the person that they are not going through this alone, and that they have a network of people that they can rely on.

What are the risks involved?

Parents going through depression, particularly women, tend to adopt a cold parenting style which is characterized by hostility and negative affect. Children are affected in that there is a decline in their physical health. There is also a link between depression in parents and accidents, asthma and maltreatment during childhood and smoking and substance use in adolescence. Aside from physiological implications, having depressed parents can also be associated with difficulties in temperament, insecure attachment, aggression, sensitivity and high emotionality. Moreove, it is linked to low cognitive, intellectual and academic performance, distortions in beliefs that pose a risk in developing depression, lack of successful interpersonal functioning and psychobiological abnormalities such as heightened stress responses.

Childen of depressed parents can have a higher risk of experiencing depression themselves, however, the link between the two is not a deffinitely-esablished one. Nonetheless, there are associations between depression in parents and behaviour problems and psychological disorders in children. This can lead to an increase in the severity of consequences as regards to psychopathology, for example, higher rates of depression, anxiety and other disorders in both children and adolescents. To prevent this, children should be aware of mental health issues and be open about any symptoms they might be experiencing. Having a depressed mother could lead the child to withdraw from talking about their own feelings in fear of upsetting the mother even more, but two-way communication is very effective. We should keep in mind that depression is not a disorder which causes psychotic symptoms i.e. getting out of touch with reality, so even though the mother might not be as approachable and accessible, they are still aware of other people’s feelings, especially those that they really care about. It is also suggested that if the child is suffering from any symptoms, they open up with their school counsellor or guidance teacher as to direct them to the help they need.

Having experienced depression during parenthood, Danielle, a writer on ‘Chicago Parent’, speaks of the possibility of losing oneself when one’s life revolves around daily appointments and being a parent. She claims that going to therapy helped her think of what would make her feel better and helped her take control of her mental illness and act as a parent again. It is important that the parent still values themselves in the process of taking care of their children.

Luanne Grima is a psychology student who works as a childminder with Willingness. She also forms part of Betapsi nio for luanne.