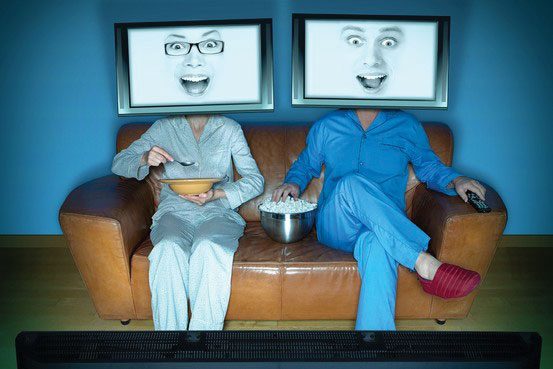 Binge watching as defined by a Netflix survey means that a person watches between two to six episodes of a show in one sitting.

Even if, when asked viewers seem to be positive about binge watching studies found some correlations related to binge watching and health and social problems.

Sitting for a long time looking at a monitor increases your risk of health issues (including diabetes, heart disease, and cancer), even if you also exercise regularly. It is suggested to take mini breaks in-between episodes and stretch. Moreover, studies found out that binge-watchers were more likely to report higher stress, anxiety and depression however this can also work the other way round, that binge-watching reduces such mental issues when used as a means of relaxation. Binge watching can be a form of addiction when one is watching more episodes than planned, leading to neglecting life activities and responsibilities. It is suggested to stick with watching one episode at a time which also creates a sense of curiosity.

On more positive aspects, chatting with other fans about the show can be a form of socialization with new people. Moreover, binge viewing can be a source of bringing friends, family and partners closer as they share the same interest in the show.

So as everything else in life, keep a balance! Enjoy that one episode with some hot coco and a cat to snuggle with but don’t get too personal .. it is just a series after all!