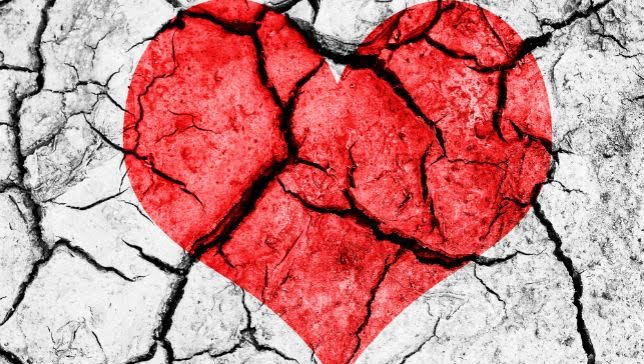 Have you ever experienced a broken heart? Maybe because your relationship came to and end, or your best friend ended the friendship? Whatever the reason was, most probably you felt sad, hopeless, angry, depressed….

Did you know a broken heart could, in rare cases, potentially lead to heart problems? Takotsubo Cardiomyopathy (TC), better known as Broken Heart Syndrome, is a temporary heart condition often caused by a stressful situation -for example a break-up. Symptoms are similar to those of a heart attack, namely sudden chest pain and shortness of breath. Unlike a heart attack, there’s no evidence of blocked heart arteries in broken heart syndrome, and people recover from it within a couple of days or weeks (American Heart Association, 2016).

When you are feeling down after a break-up, it is very tempting to lock the door, close the curtains and stay in bed the whole day. However, this usually does not make you feel better. Even though you might not feel like it, there are a couple of things that you could do to feel better:

-Routine. Plan your day and push yourself to higher levels of activity. Several researchers show that ‘activity scheduling’ can reenergize you and offer help in overcoming depression (Greenberger and Padesky, 1995).

-Get enough sleep. Research has shown that sleep deprivation suppresses the immune system (University of Washington Medical School, 2017), which potentially could lead to getting sick. Besides, a lack of sleep and the negative health effects associated with it induces stress (Walker, 2008).

And last but not least: be patient and give it some time. You will see that after some time you are thinking less and less about the break-up and are actually enjoying life again. Oh, and do not forget…. you are not the only one having to go through all this and there will definitely be somebody to help you.

– Esther is an assistant psychologist at Willingness.  She works with adults and couples.  She has a special interest in mental health. She can be contacted on esther@willingness.com.mt.