The cycle of abuse 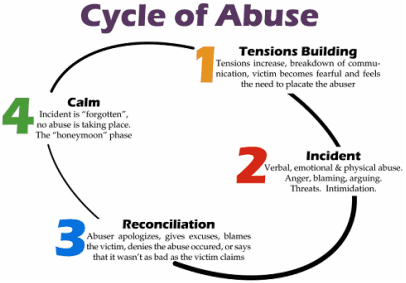 Have you ever heard of the term ‘cycle of abuse’ and what does that even mean? Well in 1979, psychologist Lenore Walker successfully developed a model that describes the cycle of violence where she discovered that a lot of violent relationships follow patterns of a similar cycle (Walker, 1979). And that’s right, you read it correctly, ‘she’ because mostly when we speak of influential people in the psychological field we speak of males, so here is a shout out to a fellow female.

Now, Walker stated there is no limitation on the amount of time taken to complete the cycle which can vary from a single day, to developing over the course of weeks or even months, though it is important to note not all relationships follow this cycle. The cycle consists of several parts, the first being the tension building phase, in this part of the cycle, tension starts to arise over simple domestic matters such as children, jobs and money (Jacobson & Gottman, 1998). Verbal and emotional abuse occurs, and minor battering can take place (Jacobson & Gottman, 1998). During this phase partners try to manage the situation by satisfying the perpetrator with nurturance and compliance or avoiding the abuse.

Survivors/victims (however they identify) believe that not antagonising or provoking their partners can help with their partner’s anger. Unfortunately, once the tension becomes unbearable, the abuse will not cease from taking place and this then leads on to the next phase called the incident. This is usually brief, however, can lead to severe physical injury or psychological damage. The incident is usually sparked by the abuser’s emotional state or an event outside of their control and the event will most likely take place at home rather than in public (Jacobson & Gottman, 1998).

After an incident occurs, survivors/victims are often left feeling stunned that their companion is capable of doing such a thing. Apart from also feeling scared, nervous, disorientated, scared afraid and dazed, during this phase both the abuser and the survivor/victim tend to minimise the severity of the incident and justify the episode. Survivors/victims tend to rationalise the incident and do not categorise this as abuse, believing it is a one-time occurrence, therefore, tending to excuse the abuser.

During this time, survivors/victims find it very difficult to decide whether or not to stay with their partner, report abuse or take legal action. This is during the reconciliation phase where the abuser will apologise for their behaviour, or justify their actions blaming the partner and giving excuses for their behaviour and even downplaying the incident, that the survivor/victim is making a big deal out of nothing. This usually leads to the calm phase where the incident is forgotten, there is no abuse taking place and it is the honeymoon period, then the cycle starts again.

Walker also studied the behaviour of women who choose to stay in relationships where domestic violence is present and found that the majority of them stay because they do not have the will to leave, fear they are unable to earn sufficient funds to support themselves and children, and the fear of what the community and family would say about leaving their partner, and the fear of retaliation to them or their children (Walker, 2000).