What can your bodily reactions tell you about your emotions? 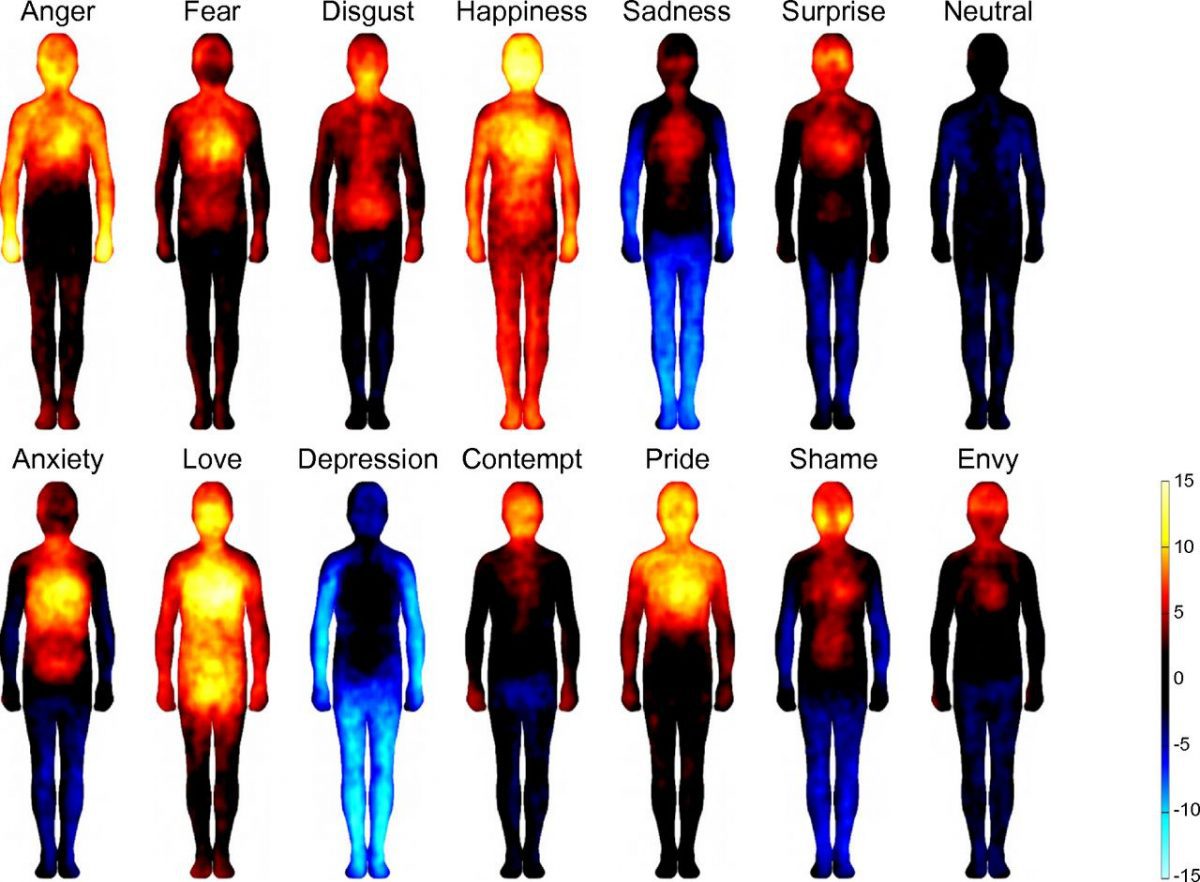 Brain research has shown that we experience emotions not only in the mind but also in the body. Falling in love can really feel like heat all over the body and horror can be felt throughout your spine.

In a Finnish study, the subjects were presented with emotive films, facial expressions and stories. Then they were asked to color computer images of areas of the body that changed as a result of their feelings.

There were six basic feelings, anger, fear, disgust, sadness, joy, and astonishment. The connections between body and mind turned out to be surprisingly similar, regardless of the people.

Nowadays bodily emotions are not as necessary as in the early days of human history. To survive at that time it was necessary that, for example, when threatened by an animal, fear raised the heart rate and made the blood move properly preparing the body for fight or flight. Although these situations are hardly a threat anymore, fear and anger are still being felt in the head and chest area. The research says that this is probably as a result of cardiovascular activation.

Amazement differs from the other emotions studied; as it is not clearly a positive or negative emotion. It wakes you up as a warning system that prepares you to react. Like fear and anger, it is also located in the upper body, but does not cause as much sensation.

In a way, the feeling of sadness causes the opposite reaction. It weakens activity especially in the limbs. The reason probably is that sadness is a defense reaction whereby the body tries to save its energy reserves, protect its resources and signal the need for support.

Joy causes the body to react differently. The subjects felt the feeling of joy all over their body. It is probable that joy prepares the body for action. Energy can be used to study the surroundings to learn how it can be used to increase well-being.

When subjects in the study saw or heard something disgusting, body awareness points were marked especially in the gastrointestinal tract. Disgust has initially been a reaction that stirs up by spoiled food, i.e. poisoning. However, the feeling can expand to morally repulsive things as well. The experience is then the same even if the cause is different.

In the end, according to the research group, one of the most interesting results was that the survey could be done at all. It shows that body sensations can produce conscious emotional experiences. For example, when I feel light, I can understand that I’m happy. These results can be used to study whether emotional disorders alter body sensations and, if so, how. The aim is to see if body maps can help identify disorders and that way help the treatment of these disorders as well.

Next time you feel happy, sad or angry, try to recognize the feeling in your body as well. Where can you feel it? Can you do this also the other way around by trying to understand the emotions behind your bodily reactions?